The dredging and bank stabilization project is expected to take two years, and will touch five towns that border the waterway. Watchdog groups say they’re encouraged by having a seat at the table. 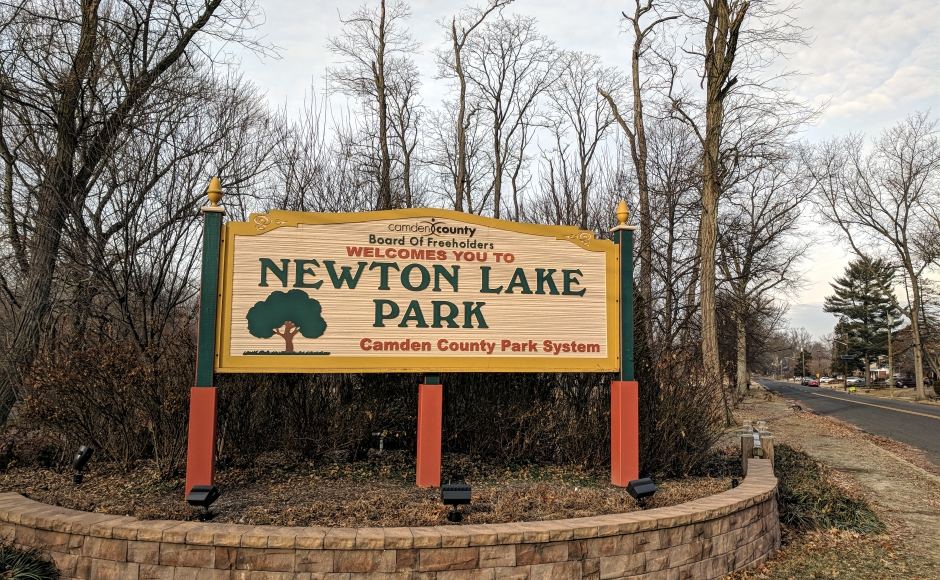 This summer, the Camden County government plans to kick off a two-year, $20-plus-million cleanup of Newton Creek, from its headwaters in Haddon Township through its tributaries in Audubon Park.

Cleaning up the creek has been a horizon goal for the county government since at least 2015, when freeholders announced that a plan was in the works.

As the Delaware Riverkeepers Network notes, the waterway is classified as “impaired” by the state Department of Environmental Protection because it “cannot support a healthy mix of aquatic life… primarily due to excessive stormwater runoff, which causes erosion, nutrient enrichment, local flooding and sewage overflows.”

From dredging to bank stabilization and outfall repair, the project will span Cuthbert Boulevard to the Black Horse Pike, covering an area roughly twice the size of the county’s $11-million 2016 Cooper River dredge.

It will be financed with a 30-year, low-interest loan from the New Jersey Environmental Infrastructure Trust, through which the county also bonded the upgrades to its CCMUA plant.

Camden County Freeholder Jeffrey Nash said the fix will cause some disruption, but should last “for at least another generation.

“There will be some pain before the gain, and that means it’s not going to look great,” Nash said. “[But] I think people will be happy to put up with a little inconvenience to have the greater benefit.”

Local environmentalists hope the project will resolve a years-old problem with an intractable neighbor they say is one of the biggest contributors of stormwater runoff into Newton Creek: the Roman Catholic Diocese of Camden.

The headwaters of Newton Creek originate in Haddon Township in streams like Saddler’s Run, which is located in Saddler’s Woods, bordering the campus of Paul VI Catholic High School. The Paul VI athletic fields and massive paved parking lot drain directly into an outfall in the forest, carrying away soil from the natural stream bed there, and depositing it into Newton Creek.

Stewardship groups like Saddler’s Woods Conservation Association (SWCA) and Newton Creek Watershed Association said their efforts have plateaued in the absence of cooperation from the diocese and the school.

“That stream that comes out of there carries more sediment than any other single source,” said SWCA Community Outreach Director Lorraine Prince. “It’s their dirt that the taxpayers of Camden County are cleaning out of the bottom of the lake.” 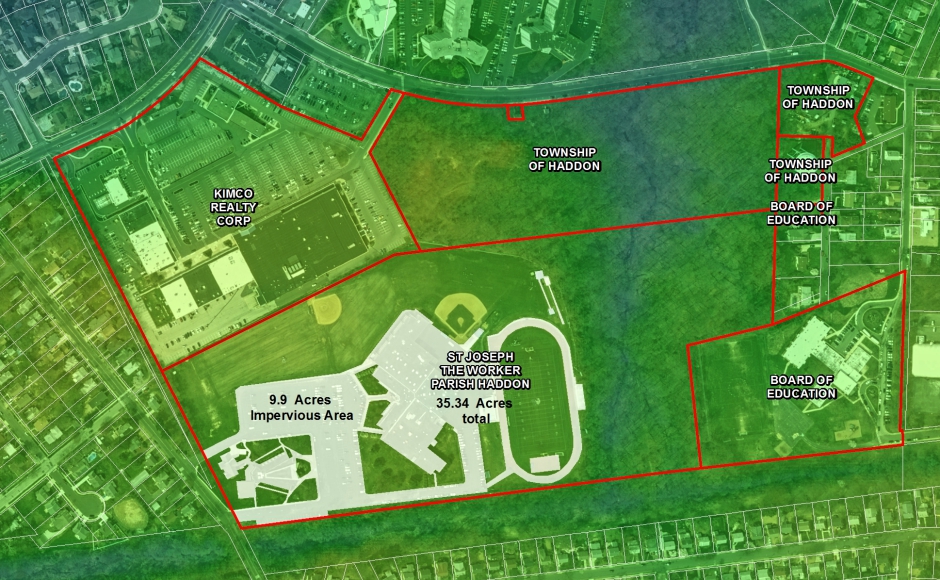 (Neither Paul VI nor the Camden Diocese responded to repeated requests for comment for this story. Nash said that the county government has been in constructive talks with the diocese regarding its stakeholdership in the project, and that a solution will be brokered as relates to the dredging project.)

Prince suggested that the problem could be remediated by rain gardens, retention basins, and rebuilding the shoreline of Newton Creek. Daylighting the stream isn’t a preferable option because doing so could potentially damage old-growth trees in Saddler’s Woods.

“We want to stop the force of that water from scouring out the entire stream bed so it washes the sediment into the lake,” Prince said. “It’s the sediment that goes in there from Saddler’s Woods and the dirt that’s eroding off the shorelines [of Newton Lake].”

Prince said the county government has been inclusive in its conversations with local stakeholders, offering environmentalists from the Delaware Riverkeepers Network, Americorps Watershed Ambassadors, and even local fishing clubs a seat at the table.

In addition to watchdogging the project, she believes the dredge is an opportunity for groups like hers to provide community education. Paul VI may be one of the least accessible stakeholders contributing to the degradation of the waterway, but property owners all along the watershed bear responsibility for its cleanup, Prince said.

“[Residents must]  make the connection between their behaviors and what happens in the water, and add on top of that the fact that their tax dollars have to scoop out what’s in there,” she said. “It’s very visible what the consequences are when it looks like green watercress growing across the water every summer.

“The more we can say to people about how their old behaviors caused the way things are now, eventually it will dawn on people that you don’t need to do so much for your lawn,” Prince said. 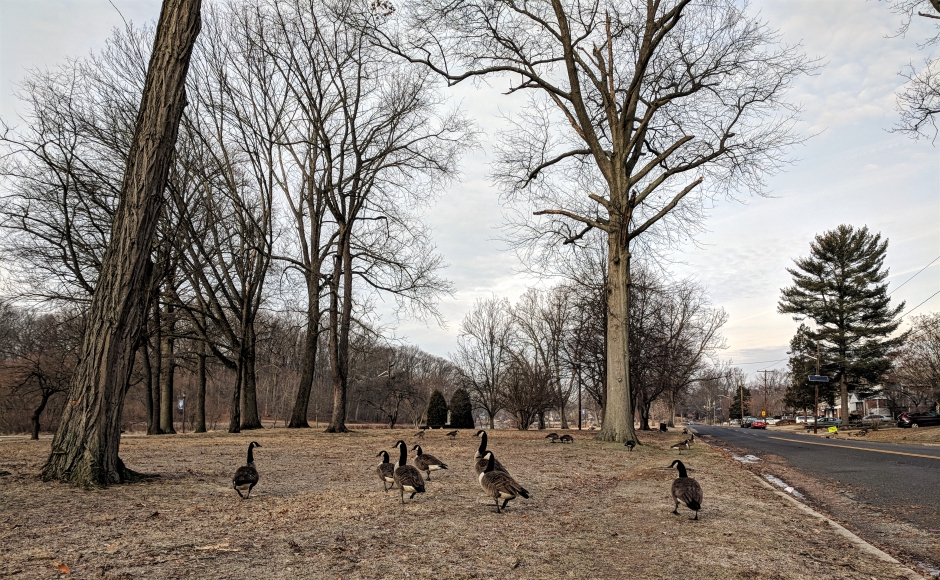 Geese at Newton Lake Park in Haddon Township. Environmentalists argue for restoration of the riparian buffer at the water’s edge to keep the geese from befouling the water. Credit: Matt Skoufalos.

Beyond the influx of fertilizers that routinely choke the waterway with algae and floral growth, the greening of Newton Lake is aggravated by waste from the geese that populate it.

After the banks are stabilized, Prince said it’s important that the riparian buffers—the tall reeds and grasses at the water’s edge—are left intact during seasonal mowing.

“People who lived along the waterways made their point long ago about wanting to see the waterways,” Prince said.

“There’s ways to landscape to let them see, [but]  you can’t mow right down to the water. Geese will not go in tall grass, so you can’t have a green lawn as the landscaped element to a park.”

Unlike the Cooper River dredge, Vesper said he’s encouraged that preliminary water sample studies haven’t shown “anything out of the ordinary. 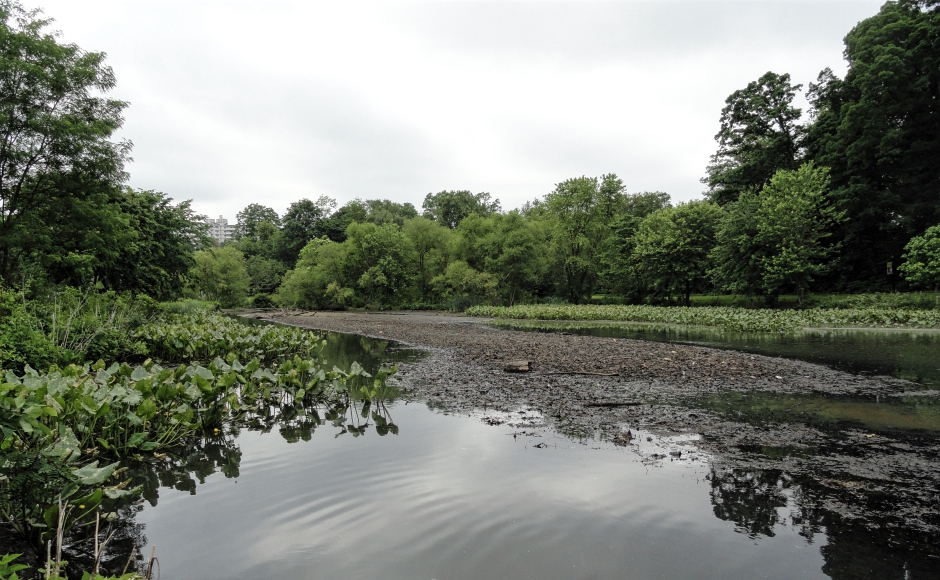 “In Cooper River, there were high levels of pollutants that we had to dredge to certain depths to clean it up,” he said.

“What’s really driving the costs [of the Newton Creek cleanup]  is the length.

“To clean it up from Cuthbert Boulevard up to the Black Horse Pike, that is an immense area, and in doing that, we’re engineering more,” Vesper said.

After the improvements, Vesper said Newton Lake will feature increased depth for recreational activities like kayaking and fishing, as well as eliminating residual problems from storm runoff.

“It’s truly going to be fixed properly,” he said.

“The properties that surround the waterway are some of the most valuable in the county,” Nash said. “It’s aesthetically beautiful and enhances the quality of life for the entire community. We want to make it as special as it should be.”