After a series of contentious planning board meetings to wrap 2017, borough commissioners must decide how best to proceed with negotiated amendments to redevelopment plans for the site.

What’s to become of the Bancroft site in Haddonfield without its longtime tenant?

For 133 years, the 19-acre parcel was a residential-educational campus for South Jersey’s special needs population.

But Bancroft moved operations to its new Mount Laurel headquarters formally this month, and the clock is ticking on some $14 million that the borough has bonded for the acquisition of the land.

Since formally approving a redevelopment plan for the site, Haddonfield commissioners have spent 18 months negotiating concepts with developer J. Brian O’Neill, who initially intended to create a behavioral treatment center there. Public outcry led the local government to broker a deal with O’Neill for the purposes of transforming it into a 55-plus townhouse-and-duplex community instead.

The current redevelopment agreement allocated 8.2 acres for use as residential units, 4.95 acres for passive open space, 4.65 acres for active recreational use, and the 1.42-acre, historic Lullworth Hall property for a compatible commercial use, possibly as offices or a bed and breakfast.

In November, the governing body proposed 13 amendments to the redevelopment plan, setting off a solid month of special planning board meetings and furious public debate over the future of the track. 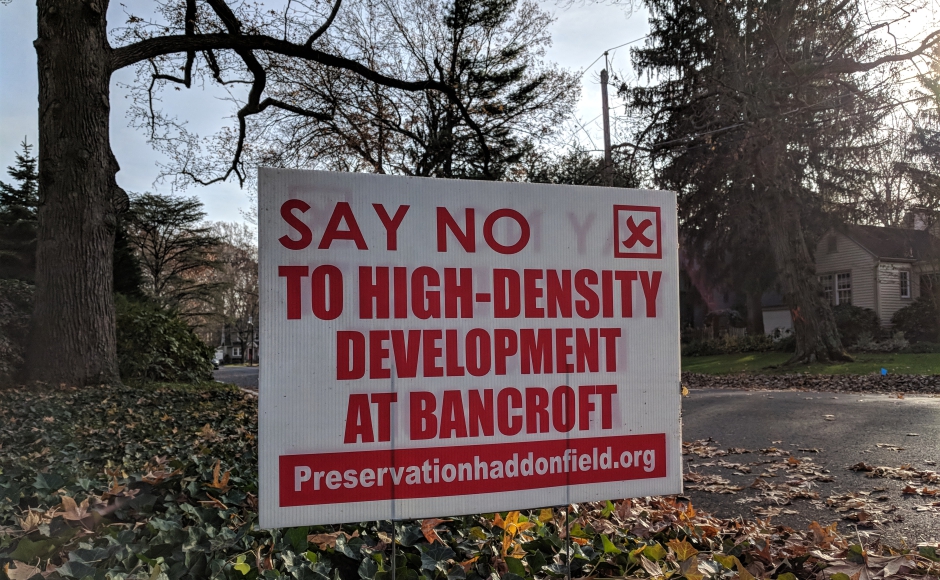 “Say No to High-Density Development at Bancroft,” spotted in Haddonfield. Credit: Matt Skoufalos.

At the end of it all, the board approved only four of the amendments, binding its affordable housing set-aside (10 to 12 units) to a pending COAH determination, widening a right-of-way on the site, and giving the board discretion to approve taller buildings there.

The board wouldn’t sign off on other stipulations the commissioners had negotiated with O’Neill—whether the development should connect to Kings Highway or be set back behind a large berm on the property, increasing the maximum square-footage of the units, various changes to the heights of the buildings and the lengths of their façades—including a blanket cushion for the developer should the project fail to adhere strictly to the amended objectives.

The board’s recommendations now pass through to the commissioners, who have the authority to dismiss or incorporate them into the terms of the redevelopment agreement. Exiting the December 20 planning board meeting, Commissioner John Moscatelli said the way forward wasn’t yet clear for the governing body.

“We need to talk about it,” Moscatelli said. “From the commissioners’ view going in, we have to consider the planning board’s input. 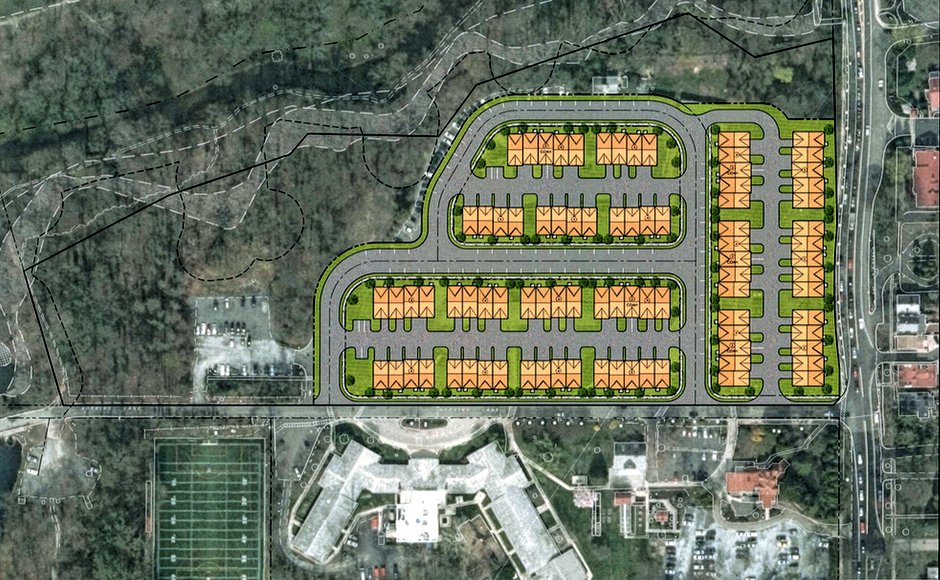 A concept plan for townhomes at the former Bancroft site in Haddonfield. Credit: Matt Skoufalos.

“I think the changes to the plan that are proposed are well in keeping with the plan,” he said.

“I think the idea that the plan is inviolate and can’t be changed is silly… they’re obviously not handed down in stone tablets.”

Moscatelli also pointed out the need for the board and the public at large to “accept the reality that if we don’t come to some sort of agreement with O’Neill, we’re going to get into legal battle” with the developer of record.

After 18 months of deal-making, failure to get the project off the ground could result in “easily” three to five years in court while taxpayers foot the bill for the debt service on the money spent to acquire the property, Moscatelli said.

“The borough is the owner of the property at the moment, but there are sales agreements attached to it,” Moscatelli said. “The borough does not have carte blanche to do whatever we want with it. We have a partner in this. We need to do whatever we can to avoid going to costly litigation for an extended period of time.”

Moscatelli also pointed out that if the deal is scuttled, the cost of demolishing existing, vacant structures on the site will likely pass to the borough so they don’t become a community hazard.

“We’d start again and go out for proposals and look at stuff, and we’d probably end up sitting on the property for a while,” he said. 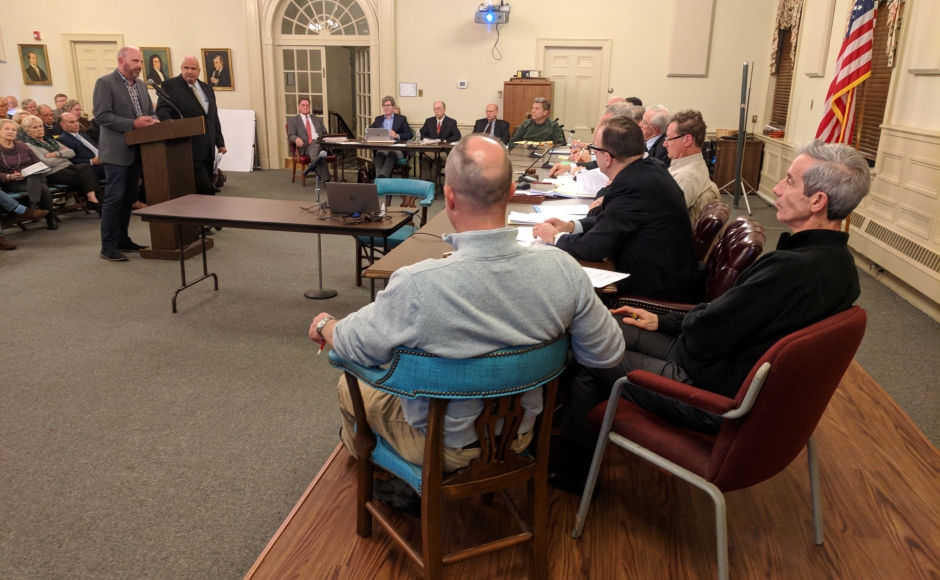 Haddonfield Mayor Neal Rochford said he believed most of the proposed amendments are negligible changes that conform with the Haddonfield master plan, “which calls for age-targeted housing without changing the character of the town.

“Redevelopment’s a complicated process, and it’s something we don’t do all the time,” Rochford said.

“We do want to get it right.

“We voluntarily brought [the planning board]  in to help guide us—to give us advice, to be transparent, to give us expertise—knowing that we’re not always going to agree on everything.

“Redevelopment plans do change, they do germinate; but I don’t think ours has changed all that much from what the original plan looked like,” he said. “It’s not like some of the plans where people have asked us to do 350 units in high-rise buildings. We’ve tried to honor the look of that area.”

One of the most vocal and consistent critics of the townhouse concept has been former Haddonfield mayor Jack Tarditi, who has led public opposition to the plan at various meetings of the local government and its boards. Among his criticisms, which included that borough negotiations with the developer ought to have been conducted publicly, Tarditi said the anticipated $497,000-per-unit price—near the borough median—is too expensive for aging residents to downsize.

“The issue for this town, as I see it, is not what’s best for the developer, but what’s best for the community,” Tarditi said at the December 20 planning board meeting. “What we’re looking at here is a redevelopment plan that was developed by the commissioners and the borough as a guide to redevelopment. Why didn’t we get plans that meet our plan?” 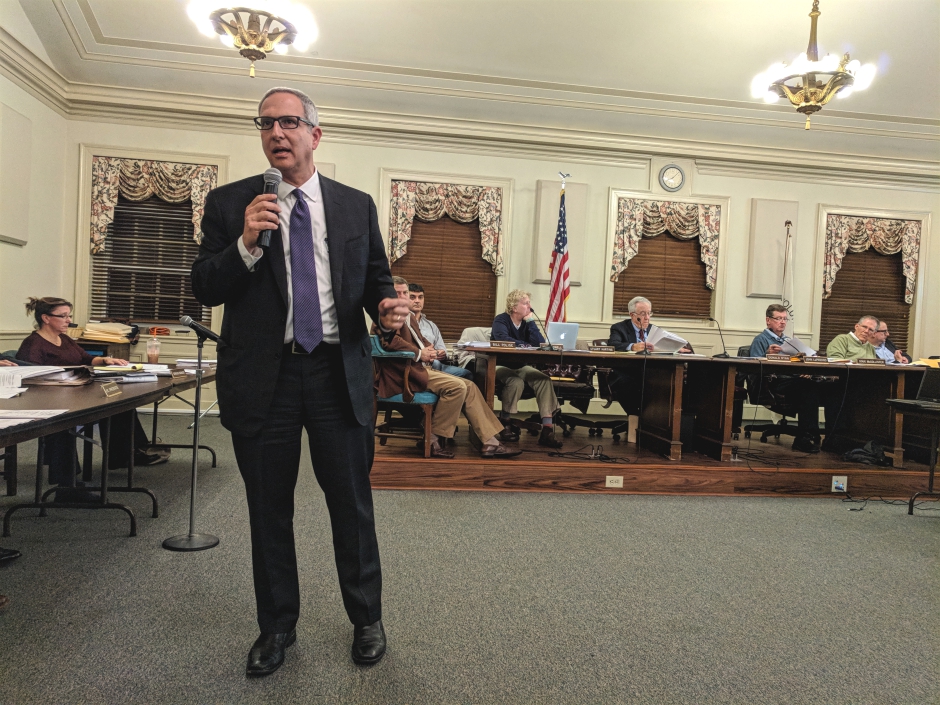 Tarditi’s perspective was echoed by several members of the planning board, who seemed to view the proposed redevelopment amendments as being driven by O’Neill alone, and not as the product of protracted negotiations.

“The tweaks are there to benefit solely the developer,” said planning board member Chris Simonson at the December 20 meeting.

“That’s okay if we’re all comfortable with where we’re going with this conceptual plan, but I think there’s some concerns.”

“This is our land,” said planning board member John Stokes. “We, every person who lives in this borough, owns a piece of Bancroft. It’s our property. We’re the owners; we are, in essence, the developers, so we get to plan what works in the long-term benefit of our town.

“I can’t tell you how many people I know my age or older that have tried to remain in town and there aren’t any alternatives for them,” Stokes said. “If we build housing that we say is suitable for those empty nesters, but isn’t really, where are we headed?”

O’Neill’s attorney, Jack Plackter of the Atlantic City-based Fox Rothschild, said both sides had “agreed to proceed in good faith and give full assistance to develop an age-targeted community,” and that, “it’s not us changing the deal.

“The ability to buy back the site was attached to a concept plan,” Plackter said. “From our perspective, it’s not us asking for the amendments.

“When the redevelopment plan got adopted, it wasn’t consistent,” he said.

“We then sat down and spent over a year-and-a-half with a committee to come up with a plan that was acceptable to the committee.

“The purpose of the redevelopment plan is to effectuate the redevelopment agreement between the developer, Bancroft, and Haddonfield. If we can make it work, do more flats, maybe be higher density, we’re all for it,” Plackter said.

At the December 5 meeting, planning board chair John LaProcido, a Philadelphia-based architect, demonstrated a dramatic alternative concept for the site as an arithmetic exercise. LaProcido said he’d wanted to see if the site could be developed in a manner consistent with an un-amended redevelopment plan.

“If there are ways to meet the same margin without deploying the same amount of capital, and offer[ing]  a shorter construction schedule, maybe there’s an option the redeveloper would reconsider,” LaProcido said. “I am not recommending that anybody builds any of this stuff. I wanted to study what could be achieved by the redevelopment plan without changing it.

What the commissioners do next remains to be seen. If the local government approves the amended plan, O’Neill’s design would still have to clear the borough planning board and historic commissions before it passes back to them for approval.