Trending
You are at:Home»Government»Collingswood»Collingswood Intros Security Ordinance to Address Persistence of Violent Crimes at Parkview Apartments

The complex has seen six violent deaths in the past five years as well as muggings, vandalism, theft, and property damage. Borough officials say ownership group Morgan Properties has failed to address these issues. 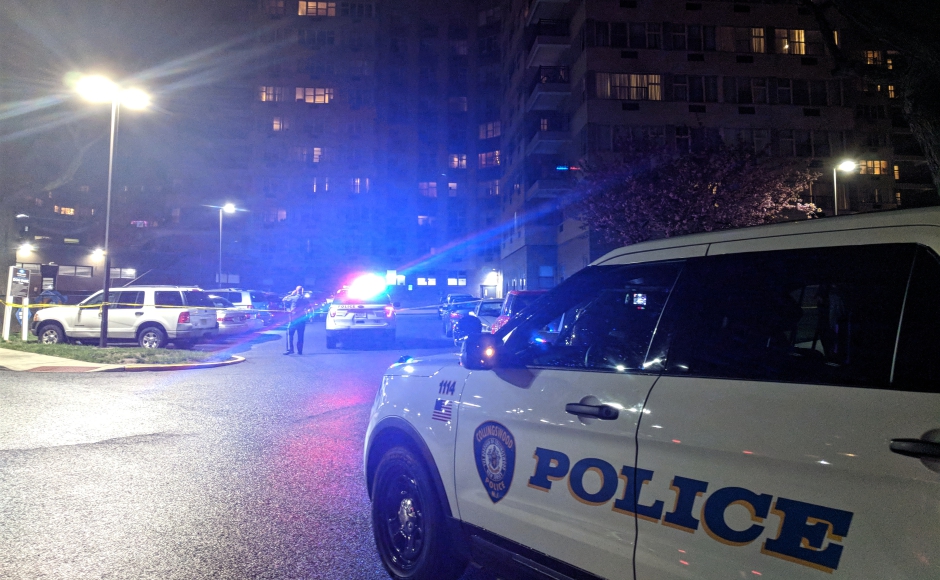 In the past five years, the Parkview at Collingswood has seen some of the most violent incidents in the community including three homicides, a suicide, a shallow-water drowning, and a series of muggings.

Residents at the complex report that their home is deteriorating amid a persistent and increasing level of neglect and property crime, from vandalism and theft to littering and animal waste.

In the winter cold, many said their pleas for building owners Morgan Properties to repair their malfunctioning HVAC system fell on deaf ears until code enforcement officials interceded.

But the final straw for the borough government seems to have been the January 2021 beating of 95-year-old Parkview resident Anthony Donofrio by a 14-year-old in the lobby of his building at the complex. Donofrio later succumbed to those injuries, and his juvenile assailant will be tried for murder in the case.

On Monday, Collingswood Commissioners introduced a change to municipal law that they hope will bring property tenants some relief, and require greater accountability from owners of the complex by requiring them to employ security guards there. 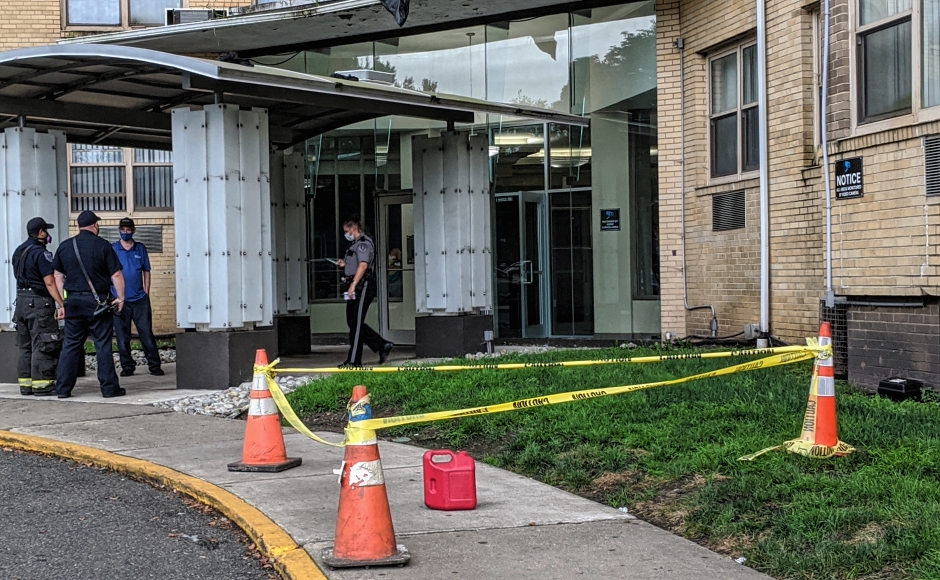 A gasoline container is cordoned off with police tape after a domestic incident outside the Parkview Apartments in Collingswood, September 2020. Credit: Matt Skoufalos.

The draft ordinance updates Chapter 237 of the Collingswood Municipal Code to require any rental property with more than 245 units to retain unarmed security guards around the clock.

The Parkview at Collingswood is the only property in town that would presently fall within the purview of the statute, and would, under its terms, need to retain one security guard at each of its buildings for a total of four.

The ordinance notes that the local government “[has]  determined that the owners of certain apartment buildings are evading their responsibility to provide and maintain safety measures to protect tenants and visitors from actual and threatened injuries and criminal conduct that has occurred on their property.”

It cites “a consistent rise in actual violence, intimidation and criminal activity, and an increasing number of police and fire calls in certain private apartment buildings” as constituting “a violation of the public’s entitlement to the common rights of peace, safety and comfort.”

Borough code already mandates that landlords “shall be responsible and liable for any activities, actions, events and conduct of any person and/or animal which occur in, on, or about said premises or property,” including “disorderly conduct, nuisance, offensive language and any other behavior or conduct which is a violation of any state statute or any of the provisions of the Code.”

‘Something’s got to get done’

Collingswood Mayor Jim Maley said the need for the ordinance was spurred on by an uptick in incidents at the Parkview as well as failed prior attempts to get its ownership and management company, Morgan Properties, to address those issues in other ways.

“Both [Collingswood Police Chief]  Kevin [Carey]  and I have had meetings over the last year-and-a-half where we’ve been told we’re going to see security come back, and it just never has,” Maley said.

“So we’re taking these steps to make sure it does,” he said.

“With what went on in January, something’s got to get done,” Maley said. “If there’s security in the lobby areas, the odds are, there’s not the confrontation.”

Parkview management does pay for some police patrols at the property, but the mayor said he is more concerned with the property enforcing tenant rules there so that Collingswood Police can enforce the law. He said the complex needs to control its doors, address non-tenant loiterers, and provide for the general safety of its residents.

“It seems, especially in the last year or two, that quality of life within the complex has deteriorated, and that’s what hopefully this [ordinance]  begins to address,” Maley said. 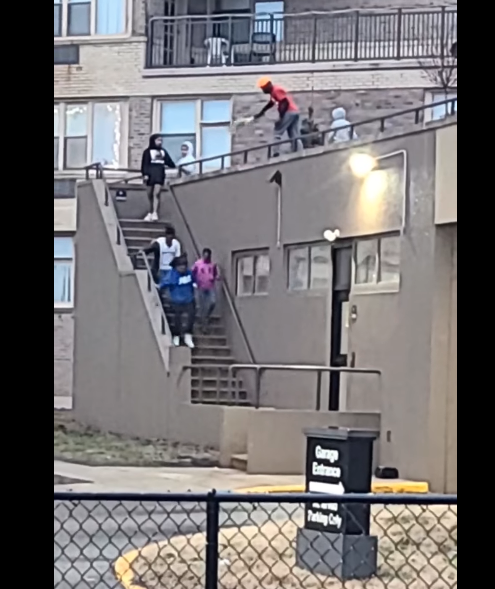 A group of residents were observed hitting rocks at parked cars with a tennis racket last week at the Parkview at Collingswood. Credit: Greg Spezzano.

‘We should be standing together as neighbors’

Greg Spezzano, a retired U.S. Air Force veteran, who has lived at the complex since 2018, said that “everything seemed fine” until his neighbor was murdered six units down from his own.

“But to see such violence and hate so close to home, where my son lays his head, that scares me!”

In less than three years, Spezzano said he’s witnessed vandalism to vehicles parked in the complex lot, “constant and blatant thievery” on premises, and “the absolute lack of respect” shown by some tenants to their neighbors.

In the past week, that included an incident he filmed, in which a group of residents was seen using a tennis racket to hit rocks at cars parked on the property.

Spezzano has additional complaints about long waits for repairs to his unit, which he said has leaky windows and a malfunctioning stove. But he’s most concerned about tenants being supported by the property managers and their fellow neighbors.

“Between the lack of responsibility within the homes of certain folks, without the help of reinforcements around the property building and parking lots, this place is going to go right down to the pits of hell,” he said.

“We live in a community within a community,” Spezzano said. “We should be standing together as neighbors; friends; family. I have an anxiety attack coming to my home because I know what goes on daily here.”

In the past five years, a significant number of violent incidents have been reported at the property:

When NJ Pen surveyed residents at the property after Morel’s death, 29 of 34 respondents reported general safety and security concerns, 20 reported having had a confrontation with a neighbor, and nine said they’d personally experienced physical violence on the property.

When presented with those results, Morgan Properties said, “We strive to provide good customer service to our residents and are concerned by some of the comments received by the 34 respondents to your survey.

“However, we value their feedback and are always open to opportunities for improvement.”

Morgan has likened concerns at the 2,000-resident complex to “a microcosm of society in general,” the implication being that these statistics would mirror those of the surrounding neighborhood, or another, comparably dense apartment building.

Things have only worsened since those numbers were reported.

Carey estimates that a quarter to a third of those Parkview incidents could have potentially been handled by an onsite security force, terming them “building-related issues,” such as parking enforcement, noise, and reports of suspicious people.

Collingswood Borough Administrator Cassandra Duffey said that trend illustrates how the Parkview has monopolized local resources more than other properties across the community. Although she believes the uptick in incidents has been exacerbated by pandemic conditions, Duffey said the trend has been enough to mandate a change in local law.

“In an ideal world, [Morgan Properties is]  invested in security for the complex because it makes their complex better,” she said. “When it doesn’t happen, that’s when we look at it from a governmental level.”

“This is the kind of action we can take from a long-term policy perspective,” Duffey said. “We’re hopeful that, either way, a result is achieved that increases security and creates a safer living environment.”

The borough administrator also encouraged Parkview residents to avail themselves of every resource to resolve their problems, including calls to local maintenance staff as well as reporting them to borough authorities, from building inspection officers to local police and fire services.

“I think in a lot of instances, they reach out to management, and they don’t necessarily think, ‘We’ll reach out to our local government,’” Duffey said. “If you let us know immediately, we’re able to work both arms.”

‘Inaction is not an acceptable strategy’

Collingswood Commissioner Rob Lewandowski said that, as introduced, the new ordinance may have to be strengthened in subsequent revisions to require Morgan Properties to provide a safer tenant experience at the Parkview.

Lewandowski described ongoing resident issues at the complex as “systematic problems that need comprehensive solutions,” and said that wherever such persistent problems surface, local government must take action.

“We expect all of our property owners and landlords to do the right thing always, but when that doesn’t seem to be the case, we’re going to step in and pass ordinances to protect people,” he said.

“Nobody would put up with this from their next-door neighbor on any other street.”

A request for comment from Morgan Properties was not immediately returned at the time of publication. If one is received, this report will be updated to include it.